Sonic Explorations of a Rural Archive 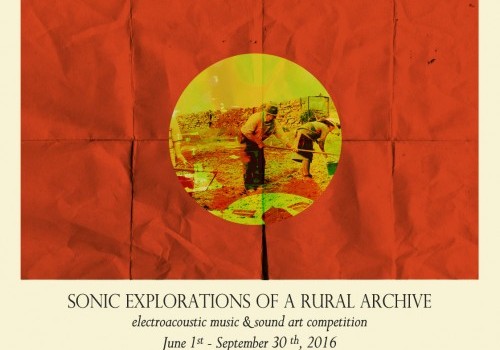 Coordination: Binaural / Nodar
In the context of Rural Viseu 2.0 project - co-funded by the Viseu Terceiro project of the Municipality of Viseu (Portugal) and the Creative Europe programme of the European Union – SOCCOS Sound Art Network.

Viseu Rural 2.0 is an integrated project of rural heritage documentation and archiving, sound/media arts creation and cultural diffusion, being developed in the rural areas part of the Municipality of Viseu (Portugal) during 2016. The project takes its motivation from the assumption that there is a need to give expression and density to a often forgotten rural arc surrounding the city of Viseu, which memory and character are also part of the history of the city itself.

After a 1st version of the Viseu Rural 2.0 project developed in 2015, in the context of which were produced 120 audio and video documents, were created ten sound works by artists from six countries, were produced five radio documentaries and organized a final retrospective exhibition that was patent at Casa das Memórias in Viseu, between November 2015 and April 2016, the follow up of the project brings some new features, including one that is now announceed SONIC EXPLORATIONS OF A RURAL ARCHIVE - Electroacoustic Music and Sound Art International Competition.

This international competition invites electroacoustic musicians and sound artists from around the world to produce sound works based on the Viseu Rural 2.0 archive, that is being collected and archived by Binaural/Nodar (available at http://www.viseururalmedia.org/download ), thus creating a sense of exploration and diffusion way beyond the borders of Viseu and its rural surroundings.

Each artist can freely select and download sound files from the archive and add other sound sources and sound processing, in order to create a sound work inspired by the rural context of Viseu, which should be submitted (in .wav/16 bit format) until September 30th, 2016 to be evaluated by the selection panel, composed by the board of directors of Binaural/Nodar and associated experts from SOCCOS European sound art network.

Apart from the sound piece, which should have an exact duration of 10 minutes, each artist must include an updated biographical note including contacts (maximum 1,000 characters with spaces), a title for the work, a text on the work (maximum 2,000 characters with spaces), and finally an image (photography, drawing, collage, etc.) that visually depicts the sound work, with the size of 30cm x 20cm in 300 dpi.

The material should be submitted as links (Google Docs, Dropbox etc.) via the contact form available at http://www.viseururalmedia.org/contactos.

The audio and visual material from the winning works will be exhibited in a retrospective exhibition to take place at Casa da Ribeira in Viseu, from December 2016 (on dates to be announced) and will later be available online at http://www.viseururalmedia.org .

20 artists/works will be selected with the following monetary prizes to be awarded each one:

The first two winners will be invited to attend the exhibition opening to personally receive their prizes.

Additional information on this competition:
Contact Luis Costa (president of the board of directors at Binaural/Nodar)
Tel. +351918951857 or luis@binauralmedia.org.