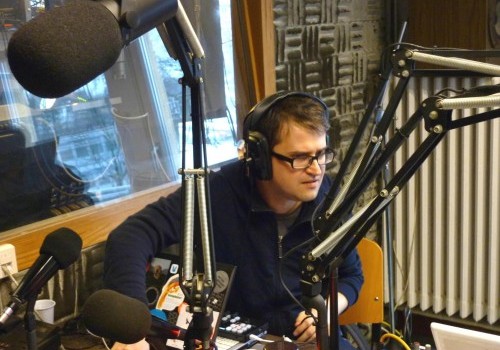 Memories, lost places and objects condition and shape the spaces, territories we inhabit. The past relationships, city life patterns and human connections once created are never really lost, just placed into dusty and deep archives. How to reveal authenticity of the cities, such as Brussels, when it’s rich past is pushed away by contemporary stories, uncontrollable velocity and micro-rhythms of the city dwellers.

Daniel Brozek came to Brussels without knowing any local languages: nor French, nor Dutch nor German, but was intrigued by the city’s sonic past. His intention was to gather a sound collection authentic and unique to Brussels. Recognizing the fact, that without a common language, the direct communication with the surrounding environment might be out of reach, he used his ear as an instrument, to track how city is approached by a complete outsider, i.e. foreigner.

On the last evening of his residency at Q-02, Daniel has presented two pieces of avant-garde composers: "Monochrome" by Zbigniew Karkowski (PL) and "Parabolique d'Enfer" by Henri Pousseur (BE). Alongside with Iannis Xenakis, these names represent compositional practices used for music creation, which for Daniel Brozek constituted aa a context for his composition – Concrete BXL -  4-channel spatial sound installation, which is, on one hand, a tribute to previously mentioned composers and their approaches to music, on the other hand, it’s an ethnographic sound map of Brussels, a sonic collage, which consists of the memories about Congo, recollections about Phillips Pavilion built for Brussels Expo’58, Paul de Vree sound poetry and references to Patrick Roegiers book “Le Mal du Pays”. The piece as well incorporates the sound material made available by Radio Panik, Radio Campus, Royal Museum for Central Africa and "Parlez-vous Saint-Gillois ?" project archives, recorded voices from the Sunday market in Gare du Midi area and other places, which are less easily recognizable.

The sound installation reveals the complexity of the identities of the cities in general. Cultural, linguistic and temporal correlations are not an easy topic to deal with, specially, from the point of listener/outsider.  Even so, the installation makes the vanished past of Brussels available and present.

Recording of Concrete BXL is availbale on SoundCloud:

Daniel Brozek/Czarny Latawiec from Wroclaw (Poland) stayed at Q-02 in the two early weeks of January, 2016.