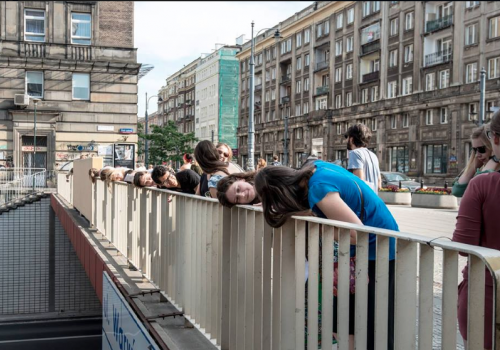 During the SoCCoS partners meeting we invite audience to participate in two special events!

December 8, 2015 (Tuesday) at 6.30 PM
SoCCoS OPEN SESSION: What are the sound residencies?
Meeting held in English.

On the 8th and 9th of December MDM Studio in Warsaw, on 9/15 Marszałkowska Street, will be once again filled with sound. Two special events will take place during the visit of curators from the international network of sound residences Sound of Culture – Culture of Sound.

On Tuesday, the 8th of December, participants of the meeting SoCCoS OPEN SESSION will learn what unites and what divides the sound activities implemented on a windy island in the Baltic Sea, in a mountain village in Portugal, as well as in residency centres throughout large cities. Curators from affiliate SoCCoS institutions – Q-O2 (Belgium), Binaural/Nodar (Portugal), Hai Art (Finland), and DISK (Germany) – will share what sound residences represent to them.

On Wednesday, the 9th of December, a book launch of Caroline Claus’ URBAN SOUND DESIGN PROCESS will be held. Caroline Claus is a resident of the A-I-R Laboratory Program at the CCA Ujazdowski Castle within the frames of SoCCoS. In the book, the author encourages the residents of Warsaw to consciously design the sound space around them. This publication introduces the secrets of sound design and documents the artistic sound research of the MDM Studio space.

The artists appearing in the film REVERBERATION from Radosław Sirko are literally filling MDM Studio with sound. The film is an hour long documentation of extremely loud concerts, which were organized in plein-air conditions unaccustomed to such events – in Upper Silesia (Górny Śląsk). Before the screening, the director will talk about the film’s creation process and assumptions, on which it is based.