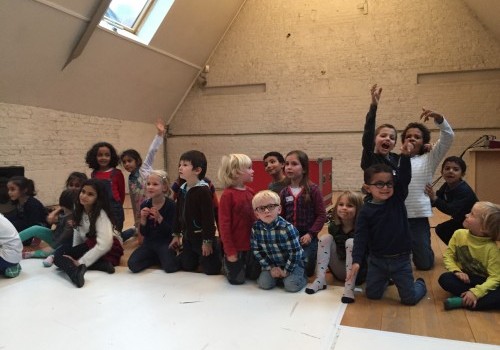 Both, Tiina and Mikko, have a solid background in architecture and design, were tempted to explore the range of possibilities which working in unknown environments would allow. Tiina is an experienced dancer and teacher, with an expressed interest for group interactions, and enjoys the combination of arts, technologies, education. The workshop included the activities with sound applications, intuitive music making on iOS, improvisations ranging between contemporary dance and improvised movements. Children were invited to go outside the building and explore the outdoor field recording techniques.

The biggest challenge that Tiina and Mikko faced was the inability to communicate with local children in their own language. Indirect ways to transmit thoughts, commentaries or advises were granted by the presence of the translators, which in some situations became challenging, but stimulated to find creative solutions.

In the end of the week, the children performed short dance and music pieces of their own creation. Short shows were the testimonies of the organic dynamics that has been created amongst the children during that week. Each of the shows became an artistic expression of their sonic and movement discoveries.

Sound movement space workshop for kids from Q-O2 on Vimeo.