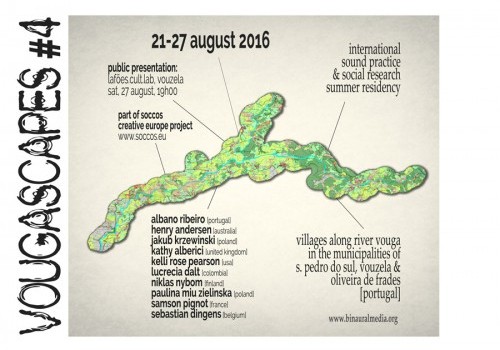 Binaural/Nodar has a longstanding experience in working creatively with specific territorial subjects, as a way to embrace a deep reflection on the complexities of the real, particularly of its rural region, Viseu Dão Lafões in Center Portugal. Following previous projects dealing with subjects such as riverscapes, ethno-architecture, religion or rural mobility, we invite international young artists and/or social practitioners for a one week summer camp to collectively work on the geographical and social impacts of the recently built water dam of Ribeiradio/Ermida in several villages alon river Vouga in the municipalities of São Pedro do Sul, Vouzela and Oliveira de Frades.

The end result will be a series of sound/media works, writings, drawings, photographs, etc. that will all contribute to a final small publication to be released later in the year.