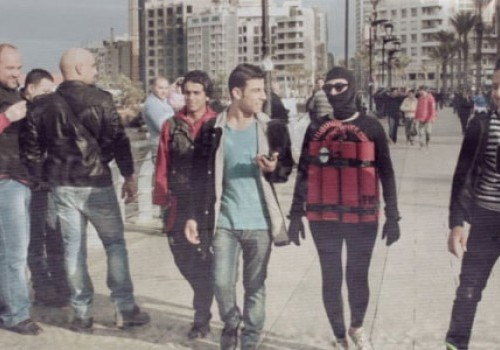 The above organisers would like to thank everyone who took the time to submit their proposals, which totalled 150 submissions from 34 different countries and collectively addressed the call’s themes and challenges from a wide and interesting array of perspectives. The two winning projects will be premiered at CTM 2017 Festival in Berlin (27.01. – 05.02.2017), and broadcast via Deutschlandradio Kultur (March 2017). The works will also be presented by the Österreichischer Rundfunk (Austrian Broadcasting Corporation) via one of their platforms: the ORF Zeit-Ton or Ö1 Kunstradio shows, or the ORF musikprotokoll im steirischen herbst festival in Graz.

What does a society gripped by fear do? Does it cease to function, or carry on in denial? Or does society’s respect for fear, which is real after all, demand we not ask such questions? Do we live our fear alone or do we share it? How can we tell a story about those emotions and questions?

In 2014, Rima Najdi performed the intervention known as “Madame Bomba: The TNT project” in her hometown of Beirut. Feeling the need to act and open a conversation about anxiety and fear caused by suicide car bombings and pervasive violence everywhere she wore a fake cartoon TNT bomb around her chest while roaming the streets.

Taking off from this action, “Happy New Fear” blends elements of experimental music, sound art, visual projections and live radio drama as it follows Madame Bomba and her search for her lover in the city, a stranger who exists in the collective consciousness and of whom everyone is afraid of. Using audiovisual material sourced directly from Beirut, Najdi maps out Bomba’s walks, her negotiation of her own fear of walking as a breathing bomb. The work aims to explore the feeling of being alone, inadequate, and to confront the illusion of having control over one’s fear. The story reflects how violence is not only direct, explosive and spectacular, but structural, gradual and anonymous, targeting everyone.

Together with musician Kathy Alberici (of Drum Eyes fame) and visual artist Ana Nieves Moya, Najdi aims to explore the environment of emotions, their multiplicity, their uncertainty, and the contradictory nature of their temporality.

“Rima is an artist working on the intersection between performance, audio and choreography. Her piece for CTM Radiolab will be an audio re-staging of her controversial Beirut walk – a sounding of the politics of fear – which captured the jury’s imagination” comments jury member Anne Hilde Neset.

Julian Bonequi – "The Death of the Anthropocene"

You will not kill me. Not in that way.
I’m a human as you.
Do you remember? Ape not kill Ape [pronouncing it crudely as in the movie].
I love your sci-fi movies, you know?

“The Death of the Anthropocene” is a project by Mexican artist Julian Bonequi that is inspired by radio drama and sci-fi movies. The work imagines a series of one-on-one encounters between ordinary people and mysterious visitors. Mutants, composite human-robot-animals, aliens… these visitors are met with aggression, incredulity, shock and disbelief as they repeatedly paint grim pictures of the future of humanity.

The diverse conversations, animated with narration, incidental sounds and specially composed musical extracts, will be accompanied by Bonequi’s own 3D animation, appearing intermittently during the performance. Expanding the narrative with non-realistic models and non figurative but associative aesthetics, Bonequi aims to create snapshots of imaginary characters and scenarios that activate our frustration towards our global inaction and fear of its repercussions.

Juror Ole Frahm comments: "Julian Bonequi's "Death of the Anthropcene" starts from one of the most disturbing moments in radio's history, Orson Wells famous radio drama "War of the Worlds", which aired life on Hallowe'en in 1938. Bonequi is less interested in the myth about this broadcast and the panic that it caused (or what the media made out of some reactions), but more in the broadcasted text of Wells' adaption. While in "War of the Worlds" the aliens are hostile, do not talk and destroy all that is living, Bonequi's multi-layered, humourous and strange adaption reminds us of the fact that Wells's fantasy is not fiction anymore. I am looking forward to a disturbing performance."

The CTM 2017 Radio Lab is supported by the Goethe-Institut, and the SoCCoS – The Sound of Culture, The Culture of Sound initiative that is co-funded by the Creative Europe programme of the European Union.