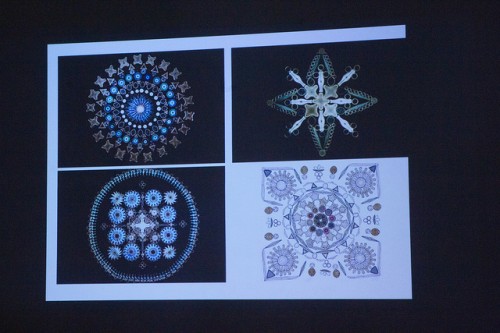 From 29 January to 7 February 2016, ten international and five Berlin-based sound art students and emerging practicioners were invited to participate in a SoCCoS Micro Residency during CTM 2016 Festival. Apart from visiting the festival's many concerts and events, the students took part in a programme developped together with the Humboldt University Chair of Transcultural Musicology. A special thank-you goes to Dahlia Borsche Carsten Stabenow, Eric Mattson, Davide Tidoni, Carsten Seiffarth for helping create the programme, Bianca Ludewig for coordinating hospitality and leading the activities, as well as volunteers Kyra Crisp and Salomé Stressing from SAE's Music Management class.

The MusicMakers Hacklab is a weeklong open, collaborative laboratory hosted by Peter Kirn of Create Digital Music and musician and noise artist Ewa Justka.The Hacklab engages in producing cross-cultural hybrids that imagine future topographies of sound and music performance through its "Future Rituals" theme, re-educating our electronic selves in the potentials of near and distant traditions, systems of musical representation and structure, and performance techniques. The theme for experimentation is a kind of ethnomusicology for machines. The Hacklab celebrates its 3rd edition within the CTM Festival at the CTM 2016 Seismographic Sounds Exhibition opening, with special performances by this year's invited host Ewa Justka & more guests TBA.
About the Hacklab: http://www.ctm-festival.de/festival-2016/transfer/musicmakers-hacklab/?type=0

The desire to present installation-based sound art provided the conceptual framework for the project gallery »singuhr — hoergalerie« in Berlin since 1996. The focus was on works that were specifically conceived for and subsequently realized in the spaces used by the gallery. At first the work of »singuhr — hoergalerie in parochial« was concentrated on the spaces of the Baroque Parochialkirche (Parochial Church) in Berlin Mitte, where 55 exhibition projects were undertaken between 1996 and 2006, before the city’s two historic cisterns in Prenzlauer Berg became the central presentation venues, along with smaller project spaces, for a total of 33 »singuhr — hoergalerie« exhibitions from 2007 to 2013. Since 2014, the new »singuhr — projects«’s work has been focused on both the securing of new arrangements for the production and presentation of site-specific sound art — for instance through project-related artist residencies — and on the development of an increasing number of co-operative, discursive and theoretical formats.

Carsten Stabenow (1972) works as independent curator, producer, communication designer, and artist at the intersection of artistic production and mediation. He studied communications and postgraduate interdisciplinary studies in Berlin, and is the initiator of diverse festivals, formats, and initiatives within the context of new media, art + science, and sound art. Stabenow is the founder of the German media art festival garage, initiator and artistic director of Tuned City, and co-founder of the Berlin art and media production platform DOCK. As a member of the Staalplaat Soundsystem and solo, he has realised several installations and performed internationally. In his work he is interested especially in physical, social and political parameters of space.
http://www.carstenstabenow.de

16:00 Presentations by students from Humboldt University seminar: “Studying Popular Music with a Focus on Electronic Music Festivals”
i. Turkish Culture within the Berlin Club scene — Josepha Kirchner and Tessa Vannieuwenhuyze
ii. A Comparative Case Study of Live Coding in Newcastle and the North of England with Electronic Music in Berlin — Alex Lancaster and Charlotte Thompson
https://www.hu-berlin.de/de/einrichtungen-organisation/verwaltung/bolognalab/projekte-des-bologna.labs/berlin-perspectives/kursprogramm/ws20152016/studying-popular-music-with-a-focus-on-electronic-music-festivals-in-berlin

Dahlia Borsche — “Locating Sound”
In this session the Department for Musicology at Humboldt University invites the SoCCoS Micro Residents to enter into a dialogue between scientific and artistic investigations of sound and music. Taking place at the department’s lounge the session will start with a dialogue between different musicological approaches in the form of two short introductory lectures: Prof. Jin-Hyun Kim (Systematic Musicology) will talk about “shaping sound in time”, followed by Dahlia Borsche (Transcultural Musicology) with a talk about “locating sound”. Emerging thoughts and questions will subsequently be discussed in an open round with the SoCCoS participants and interested students of the department.

14 - 15:30 Meet & Greet for Collaborative Networks
Presentations by three European Union Network Projects. A chance to meet the organisers and partners of the SoCCoS (Sound of Culture, Culture of Sound), SHAPE (Sound Heterogeneous art and Parformance in Europe) and European Network for Contemporary Audiovisual Creation (ENCAC) initiatives, learn about their initiatives and productions, and to find out how to get involved.
More information: http://www.ctm-festival.de/festival-2016/transfer/meet-greet-for-collaborative-networks/

<a data-cke-saved-href="https://m.soundcloud.com/internet-7" href="https://m.soundcloud.com/internet-7" target"="">Sunday 07.02 MusicMakers Hacklab - “Future Rituals” Finale
15:00 (HAU2 - Hallesches Ufer 32, 10963 Berlin)
The culmination of a week of collaborative development at the MusicMakers Hacklab sees participating artists move from the laboratory to the performance venue.
About the Hacklab: http://www.ctm-festival.de/festival-2016/transfer/musicmakers-hacklab/?type=0