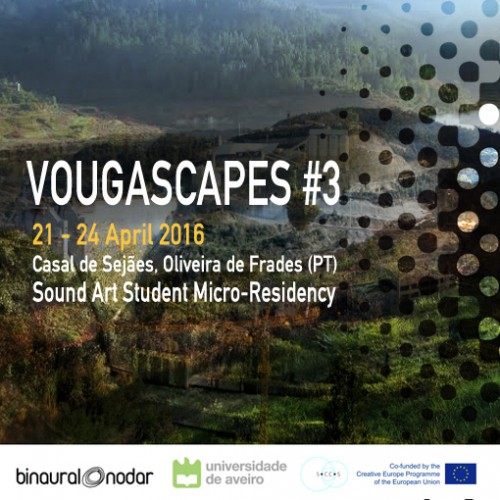 For the sixth consecutive year, Binaural/Nodar hosts on its territory an educational artist residency co-organized with the Master of Contemporary Artistic Creation at the University of Aveiro (Mestrado I Criação Artística Contemporânea, Universidade de Aveiro). This year, the residency is one of the activities of #SOCCOS Creative Europe project, of which Binaural/Nodar is part together with Q-O2, Hai Art, CTM Festival and A-I-R laboratory.

The participating students will do collective creative work on the banks of River Vouga, particularly near the village of Casal de Sejães, Município de Oliveira de Frades, near the recently built water dam of Ribeiradio-Ermida, assuming this water dam as an interesting context for landscape and social reflection and for sound-based contemporary artistic practice.

Specifically each students will be able to develop one or several of the following propositions:

Five minute non-stop sound recordings of impressionist aspects of the banks of the lagoon generated by the water dam
Five-minute sound interviews to local population with just two questions: what is your most ancient memory of the river? how do you imagine the village and the river bank to be in 20 years?
Ten-minute non-stop video recordings of specific points on the banks of the river.
A series of 5 to 10 photo sequences of micro-actions in the landscape
A series of automatic writings on sound and the local context, based on immediate impulses and not previous research.

All the collected material will be later used for a series of sound pieces with additional visual elements to be created by the students uintil the end of July 2016.